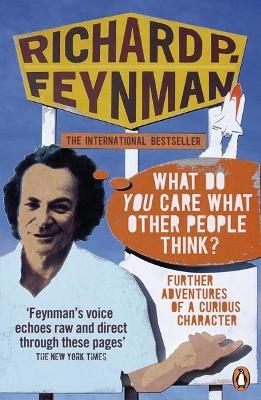 ‘What Do You Care What Other People Think?’

What Do You Care What Other People Think? Further Adventures of a Curious Character is a captivating collection of reminiscences from freewheeling scientific genius Richard P. Feynman.

Richard Feynman – Nobel Laureate, teacher and iconic intellect – possessed an unquenchable thirst for an adventure and an unparalleled gift for telling the extraordinary stories of his life.

In this collection of short pieces Feynman describes everything from his love of beauty to college pranks to how his father taught him to think. He takes us behind the scenes of the space shuttle Challenger investigation, where he dramatically revealed the cause of the disaster with a simple experiment. And he tells us of how he met his beloved first wife Arlene, and their brief time together before her death. Sometimes intensely moving, sometimes funny, these writings are infused with Feynman’s curiosity and passion for life.

‘One of the greatest minds of the twentieth century … he was also stubborn, irreverent, playful, intensely curious and highly original in practically everything he did’
New York Review of Books

‘If more scientists were like Feynman, the world really would be a better, and better understood, place’
Independent on Sunday

Richard P. Feynman (1918-1988) was one of this century’s most brilliant theoretical physicists and original thinkers. Feynman’s other books, also available in Penguin, include QED, Six Easy Pieces, Six Not-so-Easy Pieces, Don’t You Have Time to Think, The Pleasure of Finding Things Out, What Do You Care What Other People Think? and The Meaning of it All.

‘What Do You Care What Other People Think?’